What Is a Doji Candle? 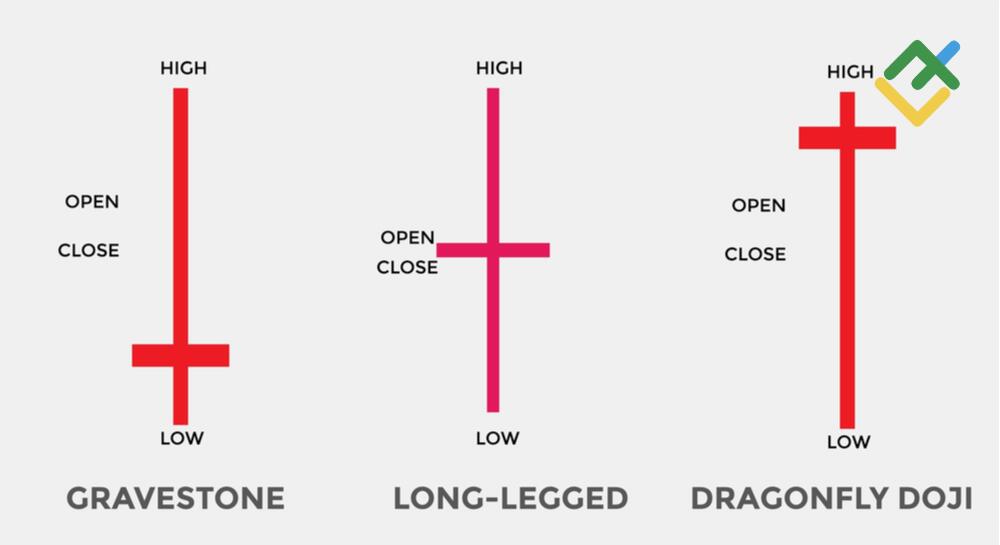 Many beginner traders have come across a strange candlestick, looking like a cross with little or no body.

A doji candlestick is a kind of technical analysis pattern, which means that the market is rather neutral; neither buyers nor sellers prevail. A doji candle appears in any market, including forex, CFDs, commodities, cryptocurrency, and the stock market.

Doji forms when the opening and closing prices are at the same level, that is why a doji doesn’t have a body. Sometimes, a doji is a candlestick with a tiny body and long shadows up and down.

What Is a Doji Candle?

A doji Japanese candlestick is a formation that appears in the candlestick chart when the price movement has stopped, and there is market uncertainty. A doji usually signals a possibility of a trend reversal.

What Does the Doji Candle Mean for Traders?

A Japanese doji candlestick is an important signal for traders, especially if it forms at the high or the low of the trend in the daily timeframe. In this case, there is a high probability of a bearish reversal or a correction for the asset.

In the classic Doji pattern, the opening price should match the candlestick’s closing price, but there can be minor discrepancies of several ticks.

Therefore, when trading this pattern, it is necessary to confirm the signal using other candlestick patterns or technical indicators.

How Does the Doji Candle Forming?

A doji pattern is so popular in trading because it can signal the formation of the top, especially if the pattern appears following a long white (bullish) candlestick. When a bullish trend continues for some time, and an asset is overbought, a doji warns buyers about weakening demand and possible bearish reversal.

However, during a downtrend, the Doji signal loses some of its strength because the formation indicates equality of forces in the market, and the potential for the decline is the same as for growth; that is, the downtrend may continue.

Therefore, when the trend reaches a low, it is essential to discover a stronger signal to confirm the price reversal and the new trend start. Such a confirmation could be a Doji morning star pattern composed of three candlesticks.

Undoubtedly, the doji candle is a strong pattern, but depending on what form it takes, it is given more or less weight. This section deals with different types of doji candlestick patterns.

Long-legged doji is a candlestick with long shadows up or/and down. This model takes on special significance at the trend high, as it indicates great indecision in the market, but bearish traders have more potential.

When a new trading period begins, the price rises sharply, then decreases. By the end of the period, the price returns to the starting mark or the level close to it.

If the price is in the middle of the trading range, and the shadows have equal length, such a candlestick is called Rickshaw.

In addition, there is a type of candlestick with a small body and one or two very long shadows. It is the High Wave doji. The Japanese call such candlesticks “loss of sense of direction.”

The Dragonfly doji has a T-like shape and looks like a dragonfly, that is why it is called so. Typically, a bullish doji appears in a downtrend and signals a reversal, but it can also occur in an uptrend. However, when it appears in an uptrend, it requires additional confirmation by other candlestick patterns. A dragonfly doji has a long lower shadow, but the upper shadow is very short or absent, so it has a more bullish character.

As the name suggests, a gravestone doji is an ominous sign that the current trend is being exhausted and is about to reverse.

A gravestone doji is a bearish reversal candlestick pattern formed when the open, low, and closing prices are all near each other with a long upper shadow.

This pattern is a significant signal in an uptrend, which warns of bearish activity at the levels reached, so, bullish traders should be prepared to exit trades. A dragonfly doji could also emerge at the low of a downtrend, but it needs additional confirmation in this case. The longer is the upper shadow of the gravestone doji, the stronger is the reversal signal.

Neutral doji means the same as a rickshaw. The price rolls back to the opening level by the end of a trading period. The market movement beyond the price range is the same in both directions, while the opening and closing prices are within the trading range. It means the advantage was equal in relation to both bulls and bears, which makes the bidders indecisive.

What is the Difference between a Doji and a Spinning Top?

In general, the neutral doji and the spinning top indicate uncertainty in the market, which is confirmed by their wicks (shadows). That is, the market is full of strength, both bulls, and bears. In both cases, the appearance of these candles can mean a reversal, but one should wait for additional signals as a confirmation.

How to Trade the Doji chart?

A doji candlestick pattern works the best when trading in timeframes of one hour and longer. Dojis appear too often in shorter timeframes, and one can’t take them as serious signals for a particular price movement. Besides, short-term timeframes feature a lot of price noise, confusing traders.

Let us have a look at a step-by-step guide to trading the doji chart on the example of the Walt Disney Company stocks:

1. First, you determine the time frame and support/resistance levels. Below, you can see the support and resistance levels in the H4 timeframe; I also marked the local high.

2. In the next step, in particular, after determining the downward trend line, you can analyze the candlestick chart. Look at point 3 in the figure below. You can see that, following a local correction up, the price chart draws the first reversal pattern, a dark cloud cover. Next, a gravestone doji appears. A combination of these patterns means that bears control the market. Furthermore, the price tries to break out the resistance trendline but sellers return the price back during the same period.

4. As you see, there is a significant gap down the next day, which bulls can’t close.

In short-term trading, one should take profit at the nearest support levels. More patient traders can wait until the price tests the resistance trendline to see where the price will go next. So, one could take the profit at three points.

You can learn more about how to interpret candlesticks in the article How to Read Candlestick chart.

The Pros and Cons of Trading the Doji Chart

I outlined the pros and cons of trading doji patterns in the table below:

Let me explain trading the doji chart on the example of the USD/CHF H4 timeframe. The figure below displays a double top pattern. Judging by the candlestick patterns, such as a shooting star, a hanging man, and a red long-legged doji at the second top, I suggest that the price has hit a strong resistance and can’t break it out.

Next, there is a pullback, and the price starts a new downtrend towards the neckline of the double top pattern, where the price meets support. Another long-legged doji appears at level 0.9746, which means market uncertainty and quite strong buying pressure.

After that, there is a short upward correction and the price draws another doji candlestick and a spinning top. It means the selling pressure increases. Next, there is a clear red (bearish) candlestick, confirming a signal to enter a sell trade.

As you see from the chart, I enter a short position of 0.01 lots at this level. The stop loss is at 0.9827. I don’t set a take profit here as it is short-term intraday trading, and the trade is exited manually.

In seven hours, the position is closed manually at 0.9678 with a profit of $7.76, which is a good result of intraday trading.

There are a few recommendations to follow when analyzing and trading doji candles.

Summing up, I would like to stress that the doji candlestick pattern is a reversal pattern that has different modifications. It serves as a warning and helps to find a good entry point.

The doji candlestick is just one of the numerous candlestick patterns in technical analysis. Of course, the theory is essential, but you won’t succeed without practicing. You can try and practice your knowledge on the LiteFinance free demo account without registration.