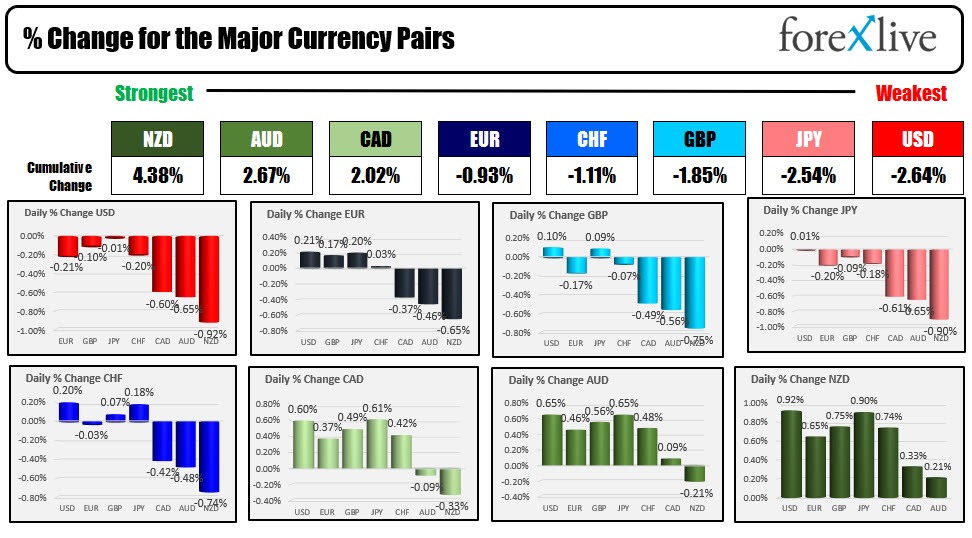 As the North American session begins, the NZD is the strongest and the USD is the weakest.

The Reserve Bank of New Zealand raise rates by 25 basis points as expected, but it was considered a hawkish increase in that some members said that 25 or 50 basis point was finally balanced, and that a 50 basis point hike in the future would not be ruled out. They also increased their expected path for the OCR to 3.35% by the end of 2024 which was much higher than the 2.6% predicted in November (their last meeting)

The USD is weaker on the back of some decreasing tensions in Russia/Ukraine after countries in Europe and North America imposed somewhat modest sanctions as result of the recognition of independence of Luhansk and Donetsk and the movement of troops into that area yesterday. There is the potential for more sanction firepower, but the hope is that by going slow, it also slows Russian aggression. Time will tell, but traders are exiting the safe haven currencies of the USD and the JPY in trading today.

US stocks are trading higher in premarket after yesterday’s declines. Both the Dow and the NASDAQ are on a four day losing streak while the S&P has been down for three consecutive days.

US yields are higher ahead of the five year note auction that will take place at 1 PM ET. Yesterday the treasury successfully auctioned off to year notes with strong demand.

Spot gold is down marginally as is crude oil. The sanctions announced yesterday did not directly impact oil although Germany did say that they would be reviewing the Nordstream 2 details.

BOE Deputy Governor Ben Broadbent said in a report to Parliament that “This is the most
challenging period for monetary policy since inflation targeting began in
1992,”

A look around the markets shows:

In the premarket for US stocks, the major indices are looking to snap losing streaks. The Dow and NASDAQ have been down for four consecutive days while the S&P is down for three straight days:

In the European stock market, the major indices are firmer with the UK FTSE 100 lagging, but still higher (but off lowest levels as well)

In the US debt market, yields have moved higher ahead of the five year note auction at 1 PM ET. The treasury will auction off seven year notes tomorrow. Yesterday the two year note auction went off without a hitch and with strong investor demand both domestically and internationally:

In the European debt market, the benchmark 10 year yields are little changed and mixed: