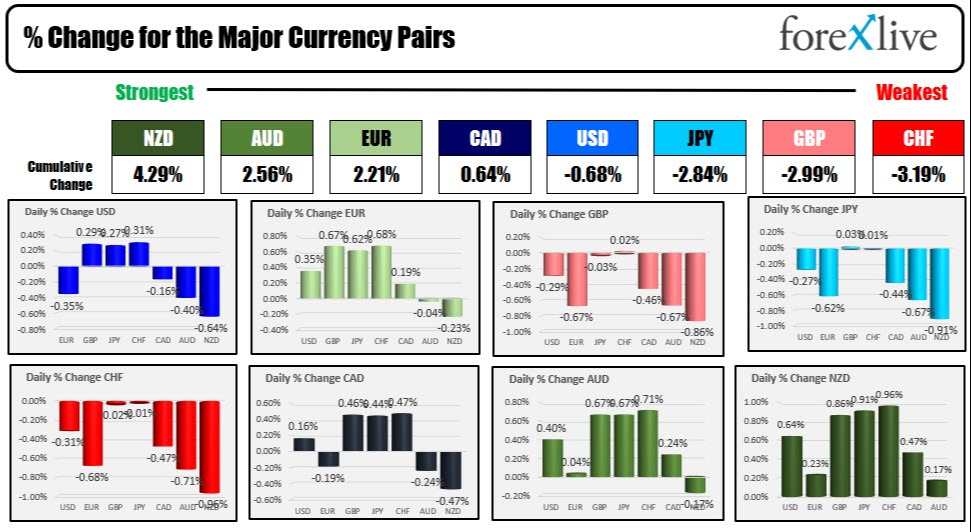 As US traders return from the President’s Day holiday on Monday (stocks and bonds were closed), the NZD is the strongest and the CHF is the weakest.

The move in the forex is not exactly a risk off variety. The CHF tends to be a safe haven. It is the weakest. The EUR is mostly higher despite the increased tension. It fell modestly in an up and down day yesterday. In NZ the RBNZ are expected to raise rates for the 3rd time in succession to 1.00% from 0.75%. That decision will be made at 8 PM ET.

The Russian news has died down a bit as the market adjusts to what is next after Russia recognized the independence of two separatist regions. The Ukraine president said today that he does not expect a military invasion. Europe is proposing a four part sanctions plan. Germany said they would reassess Nordstream 2 pipeline. US sanctions will be announced later today.

The snapshot of markets are showing:

In the premarket for US stocks:

In the European stock market, the major indices are making a come back

Yesterday Fed’s Bowman said that “forceful action” is needed which may tilt her in favor of a 50 BP hike in March..

In the European debt market, the benchmark 10 year yields are also higher after trading lower earlier.