Intel Stock Forecast: Will the Company Overcome the Chip Shortage? 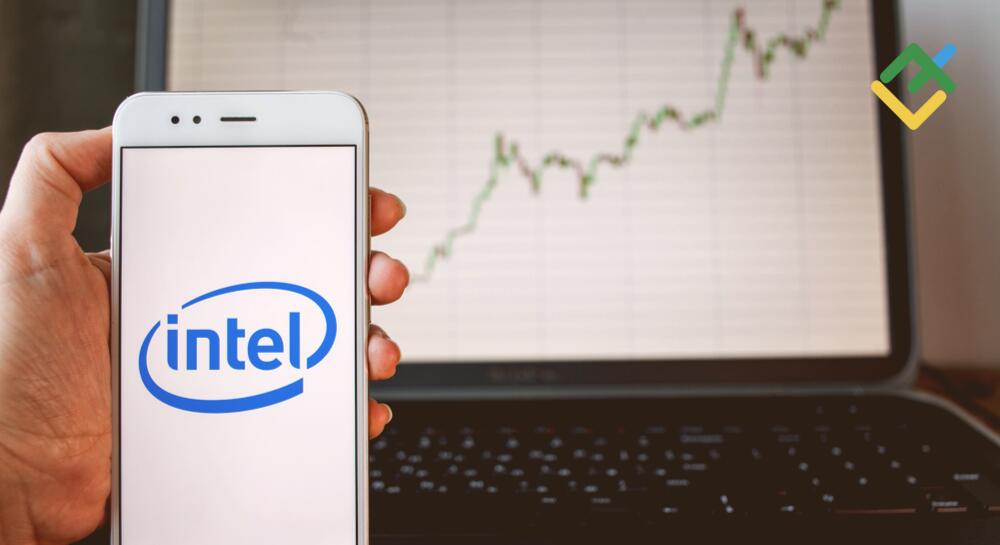 This year, investors stopped worrying that stock market growth would be too slow. After last year’s false start, it is now clear that economies are poised to rebound, with restrictions being gradually lifted globally. But where do we put the Intel shares as they seek to recover from the lost output?

Intel (NASDAQ: INTC)  might be one of the cyclical stocks that seems appealing due to the correlation with consumer spending and strong earnings results. Notably, INTC’s earnings have grown by 17.6% per year over the past five years.

For most companies, 2021 is turning out to be “a transitional year”, which was the opinion Intel CEO Pat Gelsinger shared recently. Still, the sea change hasn’t come immediately, and the chip giant still has a lot to prove. With all the additional resources thrown at Intel’s technological infrastructure, it has the potential to make this work.

Let’s dive deep into the company to see where it’s headed. What is the future of Intel’s stock? Find out in this Intel stock price forecast.

A Short Overview of Intel Stocks

What is Intel’s company profile? How much does it cost to buy stock in Intel? What else do I need to know?

Intel designs, manufactures, and sells components and related products for retail, industrial, and consumer uses worldwide. The company is known for its central processing units and chipsets, boards and systems, connectivity products, and memory and storage products.

A summary of Intel Corporation stock:

Intel became a publicly-traded company on October 13, 1971, at an entry price of 23.50 US dollars per share. Adjusted for 13 subsequent stock splits, the trading price was 2 cents.

Intel files quarterly reports with the SEC, which are in open access. We post the earnings releases and quarterly revenue statements. According to the end-of-year report, in the past year, Intel generated a record $35.4 billion from operations and $21.1 billion of free cash flow, having returned $19.8 billion to shareholders.

We’re going to name and describe three factors with the biggest effect on the Intel share price forecast.

Last June, Apple caused a major blow to Intel’s reputation. Apple confirmed that it would transition its Mac laptop and desktop computers to its own ARM-based processors. Taiwan Semiconductor was chosen as the sole manufacturer. This triggered a downward trend that started at $64.34 and didn’t stop until hitting $47.73.

The announcement meant that Intel processors were on the way out in regards to their partnership with Apple. Based on some estimations, Intel was getting 5.8% of its total revenue from supplying microprocessors to Apple. Apple’s M1 chip reportedly has 3.5-times faster central processing unit performance as well as better graphics and power efficiency.

If that wasn’t enough, Microsoft was also reported to be designing its own chips. Those will be ARM-based processors for Azure servers and Surface PCs.

If Intel wants to survive this, it has to step up its game. With both Apple and Microsoft stepping on their toes, the stakes are very high.

Intel is investing $20 billion into two new semiconductor fabs in Arizona. If this goes as planned, it should make Intel a major provider of foundry capacity in the U.S. and Europe with the ability to serve customers globally.

This should also mitigate the issue of multiple-year slips in manufacturing. So far, outsourcing to Taiwan Semiconductor Manufacturing Company (TSMC) didn’t help the company catch up. Analysts say that the use of the foundry has the potential to recover Intel’s manufacturing leadership.

But it’s going to rely solely on internal manufacturing. The breadth in portfolio dictates the expansion to external foundries for at least some technologies and products. If Intel uses the opportunity properly and finds a balance between internal manufacturing and outsourcing, it will help the company remain one step ahead of customers’ needs. In this event, the stock price will most likely go up.

Initiatives Outside the Main Line of Business

The third factor affecting the Intel stock forecast has nothing to do with chips.

Intel has a diversification strategy that gives it exposure to a number of lucrative markets. In most recent news, Intel’s corporate venture capital division invested $132 million in 11 different start-ups.

Future gains in intellectual property and expertise will be in areas such as chip design, artificial intelligence, and autonomous computing.

In April 2021, Intel and MILA announced a partnership to use AI in medical research. There aren’t any set financial goals or objectives for such initiatives. Positive feedback from the announcement wasn’t reflected in the stock price, but a potentially life-saving platform will quickly turn any INTC price prediction bullish.

At the time of writing (May 18, 2021), the average 12-month Intel stock price target from 43 analyst recommendations is $63.24 per share. 13 analysts gave it a Buy rating, 10 analysts — Sell, and 13 analysts — Hold. Below we’re looking at five Intel stock forecasts in more detail.

Ianjit Bhatti gave a $45 price objective on Intel stock, a decrease from the previous target of $63. In a note to clients, the analyst said Intel doesn’t have enough to recover from market share losses.

Analysts at Bank of America led by Vivek Arya reiterated their Sell rating and kept the price target at $62. The analysts said that increasing competition from Advanced Micro Devices (AMD) might result in “muted” growth in the near future.

The analysts of Needham & Company have a more optimistic financial outlook on the Intel stock future. The current rating is a Buy, with the price target set to $74.

Toshiya Hari at Goldman Sachs previously changed the Neutral rating to Sell. The stock analysis was recently reiterated with a price target of $59. Some of the reasons were weakening PC demand, low enterprise spending, and elevated capital intensity.

John Pitzer, Credit Suisse analyst, seems to be more excited about Intel’s stock price, set the target of Intel’s stock price at $80, which is the seventh-highest estimate on Wall Street. His rating is a hard Buy. The analyst called Intel the most undervalued and mispriced in the computing power industry that sees a strong demand.

With a downtrend lasting for over a month, is Intel going to go back up? Let’s look at the Intel stock projection from the perspective of technical analysis.

In a steady downward trend, we normally see the stock quote below the EMA20, the EMA20 below the EMA50, and the EMA50 below the EMA200. Since EMAs are not in alignment, there’s no strong indicator of a continuing downtrend. During these times, traders tend to stand aside.

As the share price managed to close above the resistance line with a gap up, we can expect a long-term upward movement.

The 2022 forecasts gravitate towards a positive outlook, expecting the price to grow from $56-$57 to $60. Monthly changes for the next year are expected to be mild, the maximum range being 1.63%.

TSMC will be working on a massive order for 3nm chip production in the second half of 2022. Since TSMC makes the majority of Intel’s core products, Intel itself will have a smaller proportion of revenue, but this will still be substantial.

Supposedly, this will open up more possibilities for research and development. This strategy should fully resolve process delays and yield difficulties. After all, working on and honing in on process advancement has always been an effective path.

Picking up the uptrend from 2022, Intel’s price might start the year at the $60 mark and reach $64 by the end of the year. Monthly changes are somewhat insignificant once again.

Both the new and departing CEOs hinted on fundamental changes in Intel’s manufacturing. As part of the company’s 2023 roadmap, internal manufacturing will account for the majority of production.

The leadership is likely to place a larger emphasis on a mixture of Intel-manufactured and foundry-manufactured products. The upcoming Ponte Vecchio server GPU is already confirmed to be taking this approach.

What does it mean for the company? With a way to leverage a cutting-edge foundry process and keep at least some of its production inside the U.S., Intel is likely to become more self-reliant, especially if AMD continues to outsource its manufacturing to TSMC.

If the 2023 manufacturing plans work out, there is a reason to believe that growth will continue. The Intel stock forecast for 2025 sees the INTC future price moving from $69 to $72.

While it is too early to give an accurate 5-year forecast, let alone a 10-year forecast for 2030, Intel may be well on track to maintaining or establishing even greater authority as one of the biggest and best tech companies. The fact that management is making prudent investments today contributes to a favorable long-term prediction and a positive trend over the coming years.

Why is Intel stock down? Let’s investigate by looking at the timeline. This will give us even more context for the INTC stock forecast. To avoid making this section too drawn-out, we’ll focus on Intel’s stock performance, starting from 2018.

The rise of smartphones, online gaming, cloud computing, and cryptocurrency set the perfect framework for a company like Intel. However, it didn’t take full advantage of this due to production delays and other missteps. In 2018-2019, Intel was unable to produce enough CPUs to meet demand, practically giving a chunk of its market share to rival Advanced Micro Devices.

Therefore, the stock had a bumpy ride in 2018-2019 with fluctuations like this:

Amidst disrupted financial markets, the stock managed to climb back up to 64.34 by June. But the blowback from Apple’s home-grown designs in the same year made it struggle for the rest of the year, ending it below $50.

The highest point in 2021 was at $68.26 at the beginning of May. But just like before, it didn’t stay above $60 for long. This was driven by the risk that the company could fail to reach its current goals under its new management. Other risks were the increased capital expenditures, a loss of part of the market share, and changes in the data center segment that could reduce the industry’s dependence on Intel.

Is It Worth investing in Intel (INTC)?

Let’s summarize the Intel stock predictions we’ve looked at in this article. The average forecast for Intel shares for the next 5 years is $65.

Despite the delay in the next-generation chip series and growing competition, Intel’s products should realistically stay in demand. After entering the GPU market, chances are the company will interfere with AMD and Nvidia’s dominance in the segment. As a result, future growth is also underway.

With a general bullish Intel stock outlook by heavyweights, key hedge funds seem to be the biggest enthusiasts. For an average trader, it’s a great indication of a good investment.

If these positive price expectations caught your interest, it might be the time to get into stock trading yourself. For a smooth introduction, start by opening a Liteforex demo account. You’ll get to explore the markets at the current trading price with none of the risks. The account is funded with entirely virtual money, but it still includes all the functionalities and technical indicators you see in live trading.

Information presented in this article is not intended as investment advice. The data and opinions were collected from multiple sources that may not be accurate. Before engaging in any form of investment, do your own research and homework on the asset.