Hanging Man Candlestick Pattern – What you should know? 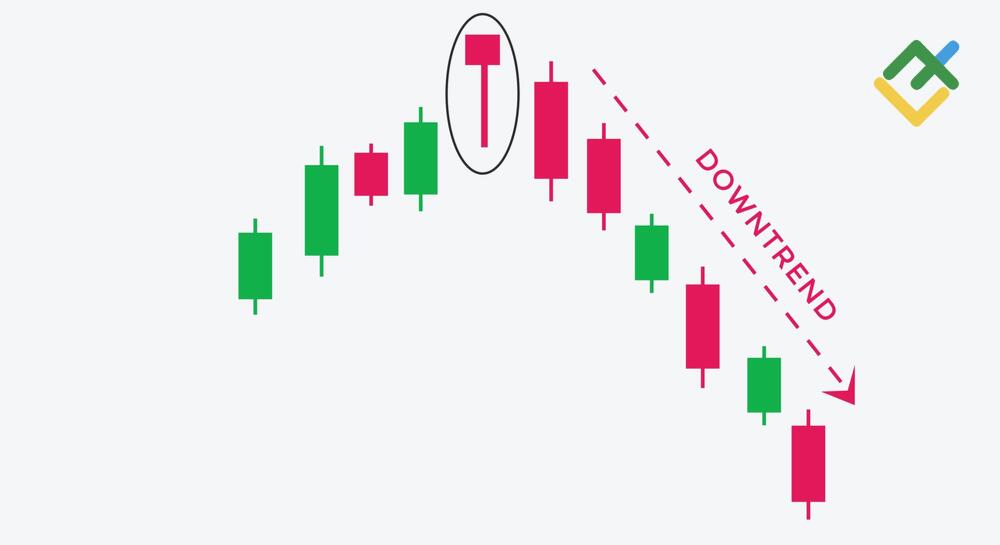 Every trader has come across an interesting pattern that appears at the top of uptrends. Many are surprised by the name “hanging man” because it causes negative feelings. However, this pattern is one of the key ones at the top. It signals that the asset has reached local price highs.

Below is a detailed analysis of the hanging man pattern and the reasons for its formation on price charts.

What is the Hanging Man Candlestick?

The hanging man Japanese candlestick is a trend reversal pattern at the top, which warns that the price has hit significant resistance and the bulls cannot push the price higher.

The hanging candle has a small real body with a long lower shadow.

The bearish hanging man has been named so because it looks like the hanging man with dangling legs. It warns the bulls about the imminent end of the uptrend.

The bearish hanging man can be either green or red. There is no difference.

The red hanging man more clearly defines the bearish sentiment in the market than the green candle.

Characteristics of the Hanging Man candle

The following features can identify the Hanging Man:

It is important to emphasize that the longer the lower shadow, the smaller the body of the candle, and the shorter the upper shadow, the stronger the bearish reversal signal.

The Hanging Man candle can be formed on any timeframe and various financial markets, including forex, cryptocurrency, stock and commodity.

How Does the Hanging Man Occur?

As a rule, the Hanging Man appears in a bullish market, or rather, signals its end.

The hanging man candle does not necessarily indicate the price reversal. Wait for this pattern to be confirmed by identifying other bearish patterns.

The hanging man can appear as part of a larger three-candle evening star pattern, which is a similar top reversal pattern. In addition, hanging man can occur along with shooting star, bearish engulfing, and other patterns.

To learn how to identify candlestick patterns on price charts, read the article “How to Read Candlestick Charts?”.

What is a Reversal and an Uptrend?

The difference is that in an uptrend, there is a steady increase in the asset’s price, which suggests further bullish dynamics.

A price reversal means the weakening of some market participants and the strengthening of others.

In simple terms, a reversal is a price direction change of an asset.

This means a change from an uptrend to a downtrend and an increase in bearish sentiment in a bull market.

For a hanging man, the reversal is usually short term.

Pfizer Inc.’s daily chart below shows how the price reverses at the top and what patterns signal bearish potential.

The first pattern, signaling a possible trend reversal, is the bearish Marubozu or Bearish Belt Hold.

After that, the second Bearish Harami pattern was formed. It warned that the trend’s strength is weakening and that the market situation is uncertain.

The key pattern was the hanging man with a red body and a long wick down. The red body of the candle indicates that the price could not return to the levels at which the trading session began. So expect a further decline.

The appearance of the second hanging man below, together with the falling three methods downtrend pattern, finally confirmed the reversal.

Why Is a Hanging Man Pattern Bearish?

It should be emphasized that this pattern appears in a bullish market.

If the hammer is situated at the bottom, then the hanging man is formed at the top and signals that the price has reached the ceiling.

It is also important to get confirmation with other candlestick patterns and instruments.

As a rule, trading on the day of the formation of the hanging man opens near the previous high. After that, a large-scale sale begins and prices recover by the end of the trading session.

This signals that the market has become more receptive to the sellers’ attacks and there is a risk that the asset has reached the top.

The hanging man and shooting star patterns both serve as important reversal signals.

The shooting star is a single-candle pattern that belongs to the ‎star category. It is the opposite of the bullish inverted hammer and appears at new highs and local tops.

Another difference between a shooting star and a hanging man is a long upper wick instead of a lower one, resembling a bright trail after a star has fallen.

Unlike a hanging man, a shooting star does not always signal a reversal at the top.

There is no difference between the red and green hanging man since only the candle’s structure is important. However, the red color emphasizes the distinctive bearish sentiment. In addition, the red candle increases further pressure from sellers.

Hanging Man, as well as other candlestick patterns, has a number of advantages:

The signal is considered strong:

The psychological aspect is determined by the fact that the trades on the day of the pattern formation open near the highs, after which bears start putting strong pressure on the price. Following the sell-off at the beginning or middle of the day, the bulls gain strength by the end of the trading session. That is, buyers try to go ahead but fail. However, for the most part, the market is already controlled by bears.

If the next day, trading starts below the hanging man body, this means that many traders have suffered losses, and the hanging man serves as a clear signal to exit trades.

Further, unprofitable trades are closed successively, which leads to a strong price decrease.

This is the price reversal, after which the market sentiment finally becomes bearish.

How to identify and trade the hanging man candlestick pattern

The information below shows how to identify this pattern on the chart and trade it. The XAUUSD on the daily timeframe was used in the following examples.

First of all, it is important to determine the instrument’s trend. The picture below shows how the double bottom W price pattern worked out. Pay attention to the bullish trend.

The chart shows that the price has formed a sequence of hanging man patterns. It is worth noting that there is a gap down between the 4th hanging man and the candle in front of it.

The breakout of the lower border of the ascending channel served as an additional signal to open short trades.

There is no perfect entry point, which is why a stop loss was invented. However, it is important to open trades only after full confirmation that the market is bearish.

The following factors confirm the opening of a short position:

It is possible to indicate three places as entry points, each of which is profitable.

But the most conservative point is the last one, as it contains three confirmations for a trend reversal. In such cases, the stop loss is placed just above the formed pattern.

It is possible to set a take profit up to the nearest support level. However, monitor your open trades, as a prolonged correction is possible. Therefore, there is a risk of loss of profits.

The most interesting is the workout of the hanging man pattern in real trading conditions. Below I will show you how to trade this pattern so that you can copy it.

The picture below shows the formation of the hanging man candlestick pattern at the level of 115.125. Then a red bearish candle appeared, which confirmed the strength of the bears. In addition, three candles, including the hanging man, formed an evening star reversal pattern.

I opened a minimum short trade with a 0.01 lot after the formation of the hanging man. Stop loss was set above this candle. Potential take profit was set at 109.254.

The picture below shows that the decline was predictable. Four hours later, the asset almost reached the take profit mark.

USCrude began to consolidate and the downward movement ended. The trade was closed manually with a profit of $40.27 (350-400%).

You can copy trades and test your pattern trading skills for free using the Litefinance demo account.