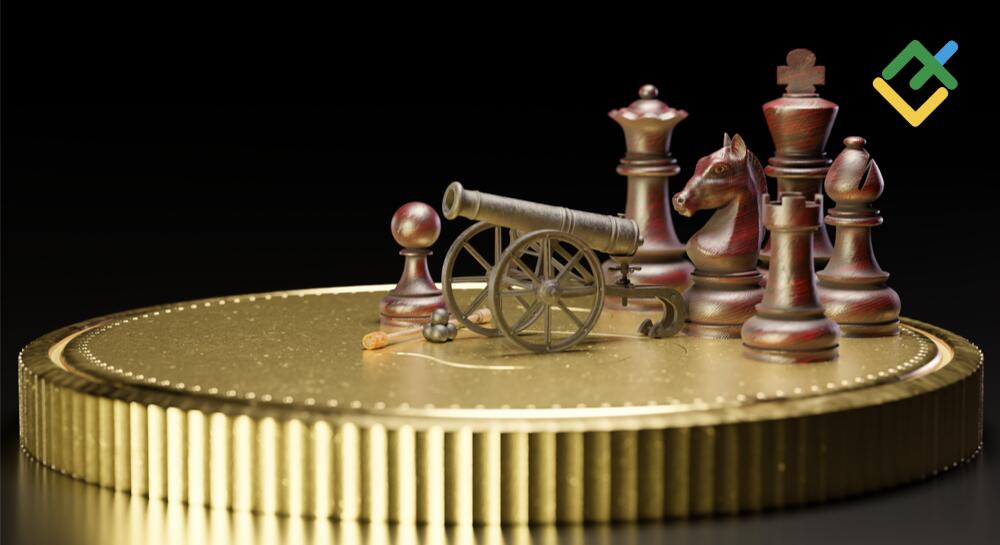 The flight of investors to safe-haven assets against the backdrop of military operations in Ukraine pushed XAUUSD to 13-month highs. Why is the gold price growing, and how high can it rise? Let’s discuss the topic and make up a trading plan.

The dynamics of gold, oil, US stock indices usually give investors an idea of ​​the state of the world economy. The simultaneous S&P 500 and Brent rally suggests that everything is fine. However, if gold and oil are actively growing and stocks are falling, expect problems. Typically, this situation occurs when the markets are scared of inflation and a serious slowdown in economic growth, eventually leading to a recession. In 2022, this is happening due to geopolitics.

Vladimir Putin’s announcement of a special military operation pushed US stocks into a bear market, Brent soared to $102 a barrel, and gold surged by 2%. When panic sets in, investors buy XAU. Neither Treasury bonds nor the yen, franc, or US dollar can compete with gold. Especially bitcoin. Last year, some analysts called BTC an alternative to gold as an inflation hedge.

It is curious that the inflow of capital into ETFs occurs for the fifth week in a row. As a result, stocks of gold-focused specialized exchange-traded funds jumped by 57.2 tons. Goldman Sachs officials expect their growth by 600 tons by the end of the year. Looking at the current situation in Ukraine, the forecast is quite realistic. As well as the bank’s assumption that gold in 2022 will be able to update the all-time high of $2075 per ounce recorded in August 2020. Then it was growing due to the global economic recession and colossal cheap liquidity from the Fed. Today, the reasons are geopolitics, inflation and fears of an impending decline in global GDP.

The Ukrainian crisis has turned gold from an ugly duckling into a beautiful swan. At the beginning of 2022, there were few optimists, namely XAUUSD buyers. The tightening of the Fed’s monetary policy, as well as the associated prospects for a rally in Treasury bond and US dollar yields, predicted bad perspectives for gold. Military operations in Eastern Europe turned everything upside down. Gold took full advantage of its safe-haven and inflation-risk hedge status and rallied.

Indeed, because of the shelling of Ukraine from the north, east, and south, the West is preparing new sanctions against Russia, and it is likely that they will affect the oil and gas sector. The promise of Moscow to respond adequately has already thrown oil prices above $100 a barrel due to concerns about a reduction in supplies. A war could push Brent up to $150, making high inflation a long-term phenomenon and increasing the risk of a political mistake on the Fed’s part. I mean an overly aggressive tightening of monetary policy, which will provoke a recession.

In my opinion, the further XAUUSD dynamics will depend on how exactly the conflict in Eastern Europe will end. The occupation of Ukraine will allow gold to update the historical high. I don’t want to believe it, but everybody needs to understand that the war will allow gold to rise above $2,000.