Ahead of the local opening on
Chinese stock markets there were a series of supportive media pieces,
urging people not be pessimistic on equities and assuring there was
further government spending sup[port for the economy on the way this
quarter. Stock,
nevertheless, dropped from the get-go. As i update they have
stabilised but are still
negative for the session so far.

BTC/USD
has had a better session here than it had yesterday. The crypto has
risen to highs just above $US40K and is a little under there as I
post.

Now
to forex … and its been another lacklustre morning in Asia with not
a lot of change. USD/JPY retraced some of its overnight loss,
hitting to above 109.90 briefly and is currently circa 109.80.
AUD/USD swung within a small range ahead of and over the release of
inflation figures; Q2 CPI came in hot for the headline (3.8% y/y) but
the core reading, trimmed mean at 1.6%
y/y, printed well under
the lower bound of the Reserve Bank of Australia target band (of
2-3%). Prior to the data
release some Australian banks had issued revised (lower) forecasts
for Q3
GDP due to the ongoing lockdown in Australia’s largest city and key
economic powerhouse of Sydney. Alongside the lower forecasts for
growth were implications for RBA policy, ANZ see the ‘taper’
being delayed to November this year while CBA don’t see it until
February 2022 and also pushed out their rate hike call from late 2022
to May of 2023. The inflation data today does not stand in the way of
any ‘lower for longer’ from the RBA.

Gold
added on a few dollars and is testing its overnight high as I post.

Hong Kong’s Hang Seng is a better performer than the mainland Shangahi Comp: 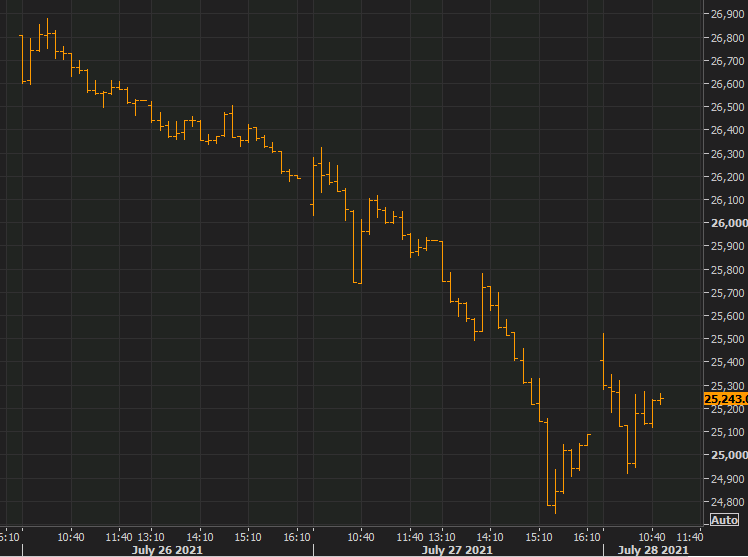