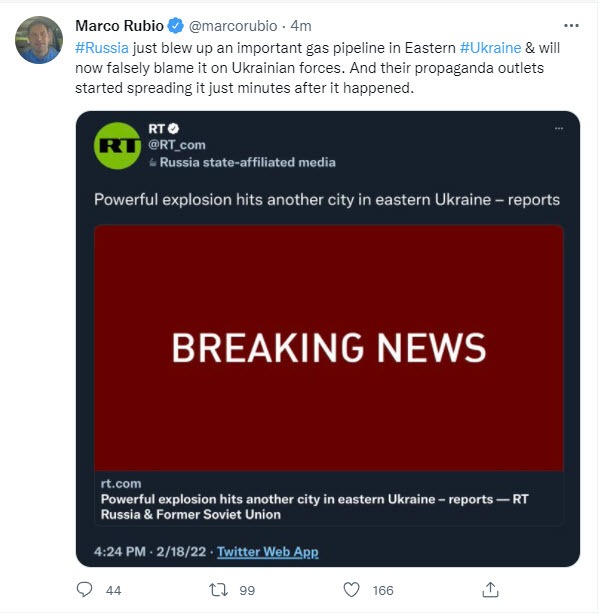 The week ended last week, with the risk of an imminent attach by Russia of Ukraine, and a week later, the risk remains.

Today, the North American session began with overnight hope that a scheduled Russian foreign minister Lavrov and US Secretary of State Blinken meeting scheduled for next Thursday was what the markets needed to defuse the risk and fear, bounce the stocks and with a little hope and luck, lead to a de-escalation on the Ukraine border.

That did not happen.

Instead, an early session headline that the Separatist leader in Eastern Ukraine had announce evacuation of residents to Russia (the plan was to evacuate 700K people to Russia). Later, there was word of a large explosion in Donetsk which ended up being the car of a Donbass security chief. Was this a legitimate assassination threat or a “false flag” – both a potential catalyst for a Russian invasion.

The day is ending with a large explosion in Luhansk – perhaps a pipeline.

Senator Marco Rubio summed it up with a tweet:

How ever you slice it, the equity markets certainly do not like the optics of all the action, and sellers started to push stocks in Europe and the US to the downside.

Meanwhile… Fed’s Williams (NY Fed President -permanent voting member), Evans (more of a dove and alternate voting member), and Brainard (Board of Governor and voting member) all lined up on the “its time to tighten” (no surprise). If anything this week, there was some lessening of the 50 BP hike in March idea, although Fed’s Bullard is gung-ho (and the most hawkish of Fed members).

Fed’s Evan’s admitted that policy is caught “wrong footed” but may not need to become restrictive. He also sees inflation more of supply and other pandemic causes and that the shocks will ease.

In the US, after moving higher on Monday and Tuesday, the US equity markets snatched defeat from the jaws of victory after peaking intraday on Wednesday.

For the week, the

In the forex today, the flow of funds today saw the NZD as the strongest of the majors (next week the RBNZ is expected to tighten by 25 basis points to 1.0%. It will be the 3rd increase in 3 meetings. The USD was modestly stronger vs all the majors with the exception of the NZD. The CAD and the EUR were the weakest.

In other markets as the day comes to an end: