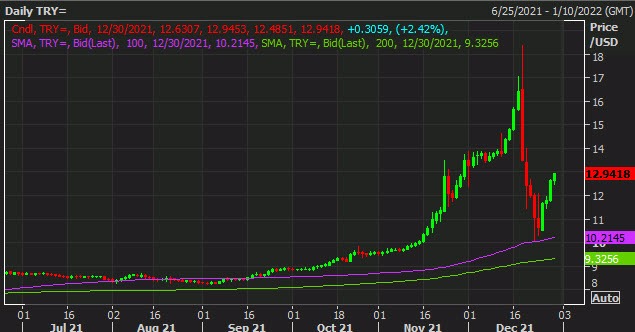 Erdogan is famous for his unorthodox policies and the latest one last week is no exception.

He announced that the government would guarantee returns on lira deposits, at a rate similar to those on foreign currency. That essentially makes up for any further depreciation in the lira. An example:

There is no specifics on how they will be funding such an initiative and to be honest, it doesn’t really solve the root problems of the currency and the Turkish economy.

As things stand, the market is skeptical about the latest move above. And that is quite clearly reflected in lira price action.

Erdogan mentioned that the announcement saw a massive surge in lira deposits but at the same time, it appears to be that the government and central bank are intervening heavily to counteract the currency’s spiral.

If the market so chooses to focus on the latter rather than the former, the dynamics of the lira is pretty much little changed.

In essence, Erdogan’s latest experimental plan is dead on arrival as it is. And that bodes ill for the lira in trying to find some stability after a massively devastating year.

In spite of last week’s strength, which hit a test of the 100-day moving average (purple line) before stalling, the lira is still down over 70% against the dollar this year. Ouch doesn’t even cover it.